Our students never believe it when we tell them that I was the worship leader on our first SERVE mission trip in 2002. I may have only known three chords and we may have sung the same three songs over and over that week, but I did at one time have some guitar skills.

If you don’t know much about this instrument, its musical tones are produced by plucking or strumming strings that stretch from the guitar’s “body” to its “head”. The pitch of these tones varies depending on placement of the guitarist’s fingers on the “neck”.

Along the neck of a guitar, you’ll notice these things called “frets”. Frets are metal wires placed at regular intervals which enhance the tone as the string is pressed down against them. As the finger moves from fret to fret, the length of the string shortens, causing the pitch to get increasingly higher. 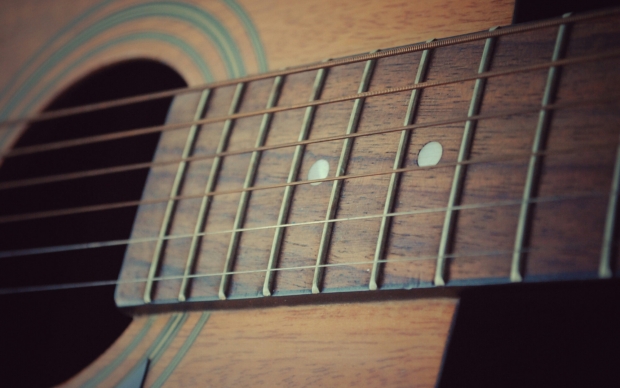 My worship-leading days may be far behind me, but “fretting” is something I am still all too familiar with.

It starts with a low, vibrating tone of disturbance. Something in my world isn’t right. Something is threatening my comfortable happiness.

When I have lost (or at least fear that I will lose) my comfortable happiness, I fret. I apply the pressure, increase the tension, and shorten my string.

I start seeing the possible negative outcomes of this situation. I don’t want any of those things to happen, so I move up another fret into “control-mode”. Because something must be done so that I can have my comfortable happiness back, please.

Then, when my selected “control-mode” solution does not produce the desired outcome, I fret yet again. Apply the pressure. Increase the pitch. And I shorten my string into the “blame game”. “Well if so-and-so hadn’t…” or “If this thing had never…”

Before I know it, I’ve moved right down the neck, fret by fret, into a full-fledged, high-pitched whine. Things aren’t going my way, I want my comfortable happiness back, and I’m going to make sure everyone in my world knows about it.

I’m not sure if stringed instruments were popular in Jesus’ time, but I do know that “fretting” was something He was completely unfamiliar with. As I study His life, I am increasingly amazed at His calm, seemingly unbothered nature in spite of the disturbance all around Him.

He knew that after seeing His miracles, people would begin chasing after Him for all the wrong reasons. He continued doing them. He knew that His teaching would be criticized, misunderstood, and twisted to be used against Him. He taught anyway. He knew that He would be harshly judged for His acts of mercy toward “sinners”. He carried on in love.

Even with His greatest suffering looming just around the corner, Jesus never allowed the pressure to shorten His string. He didn’t fret into “control-mode” or the “blame game”. His tone remained consistent and therefore His whine was non-existent.

So what was His secret? What was it that allowed Him to remain fret-free?

John 13:3 tells us. “Jesus knew that the Father had put all things under his power, and that he had come from God and was returning to God.”

The answer is that Jesus did life with an entirely different instrument. Unlike us, the root of His motivation and the foundation of His every action and reaction was NOT comfortable happiness in this life. Instead, it was glorifying God. He knew that the ease and good feelings of this earthly life held nothing in comparison to the glory of the Father, so He based everything on that.

And therefore, when the tension increased, rather than fretting into that high-pitched whine, He absorbed the vibration of disturbance and allowed it to turn into beautiful music instead. He allowed the pressure to reveal to the world around Him a deep trust in and deep relationship with His Father.

Because of Jesus, that instrument of trust and relationship with God is available to us, too. And I don’t know about you, but I’m so ready to trade up!