I have a few questions I can’t wait to find out the answers to when I get to heaven. There are the usuals, of course, like “Why is there so much suffering in the world?” and “How did that whole creating the universe thing work?” And then there’s this one: 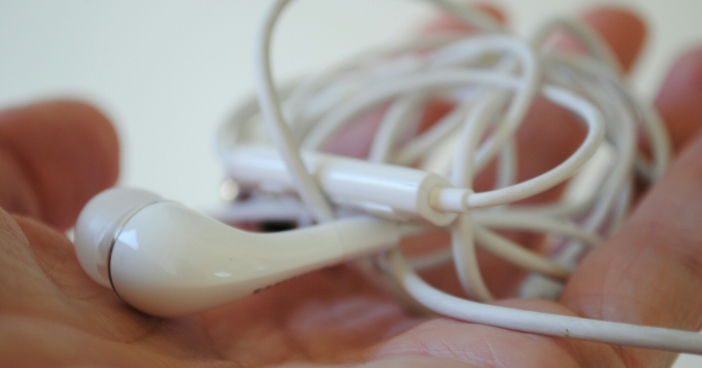 How is it possible that I can take my completely untangled ear buds, put them in a drawer for a week, and then pull them out and they look like this? No one even touched them!

I’ve done the research and no one seems to be able to give me a good explanation other than the fact that it’s inevitable. Basically (skipping the big words and mathematical formulas), whenever a cord is long enough to wrap around itself and form coils, it’s almost guaranteed that those coils, combined with any added friction or movement, will result in tangles and knots.

After 30-something years of interacting with other people on this planet, I’ve learned that the same is true for relationships. Put any two people in any sort of close proximity and tangles and knots will result. It’s just inevitable that things are going to get messy. All of our relationship ‘statuses’ should say “It’s complicated”!

Relationships are a regular source of pain and frustration in all of our lives. But a few weeks ago I came across a verse that I believe sums up, not only the nature of humanity, but our relationship problems as well.

In Genesis 20, Abraham has, for the second time in his travels, decided to lie and tell people that his wife, Sarah, is his sister. He (again) gets found out, resulting (again) in conflict between him and the local rulers who feel they have been deceived.

A big deal is made throughout Genesis about the actions of people and whose “voice” they listened to in making those choices. For example, Adam was cursed because he “listened to the voice of [his] wife,” (Genesis 3:17) and Rebekah told her son, Jacob, to “only obey my voice” (27:13) as they together deceived Isaac and Esau.

As for Abraham, he unfortunately “listened to the voice of” (16:2) his wife as she tried to solve her childbearing issues in her own way. But he also, “went as the LORD had told him,” (12:4) and it was declared by God that “all the nations of the earth shall be blessed, because Abraham obeyed my voice” (26:4-5).

In Genesis 20, though, it was a different voice that Abraham listened to:

“I did it because I thought…”

It occurred to me recently that I may be unintentionally making the knots in my earbuds worse by trying, in hurried frustration, to untangle them. It seems like it should work, but as I haphazardly grab parts of the cord and start to pull, I’m actually tightening the knots that already exist and creating more along the way.

I truly believe that most of the pain we cause each other in relationships is not intentionally malicious, but rather a whole lot of “I did it because I thought…”. Instead of listening to the voice of God and His word, we choose to obey our own thoughts of emotion, self-protection, and ‘common sense’. In Jesus’ teaching alone, He offered us so much help! But, most of the time, when we see a knot (or at least what we perceive to be a knot), we start grabbing and pulling – doing what we think should work. But in the end, we only make things worse.

For example, Jesus says: “If your brother sins against you, go and tell him his fault, between you and him alone.” (Matthew 18:15)
But we don’t, because we think, “If I just ignore this problem, it will go away eventually.” Or because we think, “I should really talk to someone else (or multiple-someone-elses) first, because that will help me process the situation.”

Jesus says: “Forgive” (Matthew 18:22)
But we don’t, because we think, “If I forgive, that means I’m saying what he did is okay.” Or because we think, “Holding onto this grudge will make me feel better – I’ll feel like I’m in control so she can’t hurt me again.”

Jesus says: “Love your neighbor as yourself” (Matthew 22:38) and “Whatever you wish that others would do to you, do also to them” (Matthew 7:12)
But we don’t, because we think, “If I show love to that person it means I have to agree with him.” Or because we think, “She doesn’t really care about me, so why waste my time?”

It amazes me how easily I fall into the trap of listening to my own voice. “I did it because I thought…” decisions are an all too common occurrence in my relationships – even when I know I’m the one making things complicated!

One of the ‘tricks’ suggested for untangling earbuds and other cords is to realize that they may not be as tangled as you think. So, instead of grabbing and pulling, try simply taking one end in your hand and dropping the rest. As they fall, many tangles will roll right out and you’ll be left with a lot less mess in the end.

Relationship tangles may be inevitable, but, as followers of Jesus we can choose to listen to His voice – and drop the rest. We can choose to let go of the way we think things should be done and trust that He really does know what He’s talking about! Obeying His voice isn’t always easy – in fact it may be the hardest thing you’ve ever done, but at least you’ll be able to say, “I did it because He said…”