13.1 miles is a lot of miles. So when my friend Maddie asked me if I was running the Rock ‘n’ Roll Half Marathon this fall, I laughed. Having never run more than 9 and never raced more than 5, the thought of even signing up for this race made me sweat!

I gave in, though (Maddie can be very convincing! “It’ll be FUN,” she said 😉) and the training commenced. Beginning with 4 and 5-mile “long” runs in May, we gradually added on miles, hoping to reach 13 by mid-September.

One day, after running 6 miles in 90-degree heat (and being sure I could never.go.any.further), I got on my phone and ordered one of those little hand-size water bottles I’d seen ‘real’ distance runners carry. If I was going to do this, I could never run that long without water again.

And it worked – my 7, 8, and 9-mile runs were much more bearable when I was hydrating along the way! 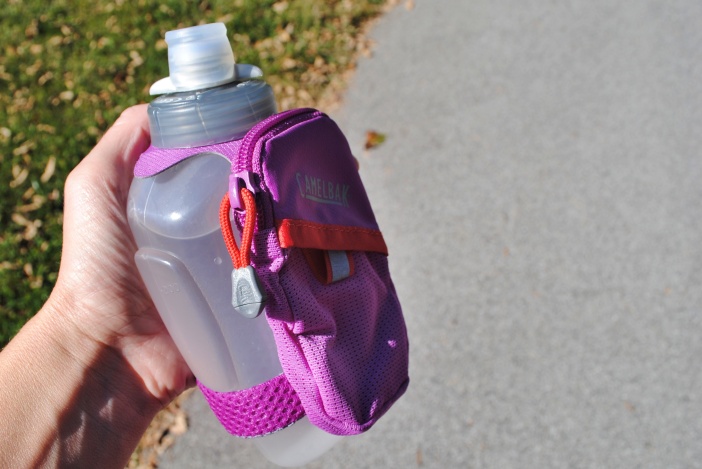 In John 4, Jesus encountered a woman who knew something about thirst. First of all, he met her while she was collecting water at a well, but further, while most women would have made the trek in the cool of the morning or evening, she was there in the heat of midday. And when Jesus, stepping outside the social boundaries of His time, asked her for a drink, she revealed a deeper thirst – a thirst for truth:

The Samaritan woman said to him, “You are a Jew and I am a Samaritan woman. How can you ask me for a drink?” (For Jews do not associate with Samaritans.) (v. 9)

Jesus, knowing that He Himself was the gratification of this thirst (see John 14:6), replied:

“If you knew the gift of God and who it is that asks you for a drink, you would have asked him and he would have given you living water.” (v. 10)

Confused (and probably frustrated that He didn’t seem to answer her question), the woman continued to question Jesus – in the end revealing an even deeper thirst – a thirst for unconditional love:

He told her, “Go, call your husband and come back.”
“I have no husband,” she replied.
Jesus said to her, “You are right when you say you have no husband. The fact is, you have had five husbands, and the man you now have is not your husband. What you have just said is quite true.” (v. 16-18)

As the conversation progressed, Jesus patiently and deliberately exposed her thirst – not to shame her – but to show her how desperately she needed His “living water”. Though the water from this well was sacred to Samaritans (see v. 12), it was only a cistern of standing, temporarily-refreshing liquid. But what Jesus had to offer was the constantly flowing “bubbling up, gushing forth”* stream of His life-giving Spirit.

I love the innocence of the woman’s response to Jesus’ offer:

The woman said to him, “Sir, give me this water so that I won’t get thirsty and have to keep coming here to draw water.” (v. 15)

We chuckle at her misunderstanding, but maybe she was on to something. Her thirst had led her to this place – both physically and spiritually – and the thought of being free from this daily chore was appealing! She just didn’t (yet) have the eyes to see that Jesus was freeing her from the greater chore of trekking to “wells” that would satisfy her desire for truth and love.

Life with Jesus is a marathon and the gulps of water you take at weekly visits to the well (or from other sources) aren’t going to keep you hydrated for the long-haul. God has given us the gift of His Spirit, whose constant flow is constantly available to us. Like my running bottle, He’s always right there and little effort is required to access His “living water”. Every time we simply engage in communication with Him by acknowledging His presence and submitting our need to Him, we are taking another hydrating sip! 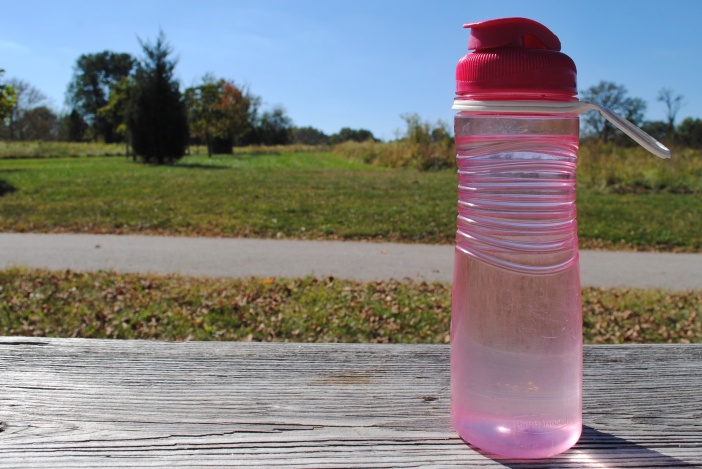 I was feeling confident the day Maddie and I began our 10-mile practice run a few weeks ago. Water in hand, I was ready to accomplish this milestone distance! But my small sips were not enough and when the nice lady in my phone finally told us we had reached our goal, I almost fell to the ground. I felt completely wasted – I couldn’t go another step, let alone another mile – let alone another 3.1 miles!

I learned my lesson, though, and the next time I ran, I drank a full bottle of water beforehand and still carried the small bottle with me. I felt much better at the end of that run and went into race day knowing what I needed to do.

Unfortunately, my strategy backfired. In my pre-race anxiety I drank two full bottles and then had to deal with the *consequences* of my actions. Five miles into the race I couldn’t take it anymore and had to make the dreaded port-a-potty stop, which was not only disgusting, but also a total a waste of my valuable time!

Our bodies need more water than we think – and if we want our relationship with Jesus to be “living,” we need more communication with Him than we think!

This week I’ve had way too much to do and not enough time to do it. So this morning, I opened up my Bible, read through the passage I’ve been studying, closed it, checked “time with Jesus” off my list, and got ready to move on to the next task.

But as I started to stand up, I felt a very clear nudge to pause (part of which may have been that the six-year-old on my lap was working on a ‘very important’ coloring project and couldn’t possibly move) and pray. It occurred to me that I had read and studied God’s words, but that didn’t mean I had engaged in communication with Him. At first it felt like a waste of time, but it turned out to be exactly what I needed!

Not a single ounce of your communication with Jesus is ever wasted – you can’t over-hydrate your relationship with Him. In fact, if you’re not receiving hydration from Him throughout the day, it’s likely that what’s being wasted is time spent trekking around to other wells looking for something to satisfy your thirst. But gallons of truth and unconditional love are just a prayer away!