“Try something new” day is one of the highlights of our summer vacations in North Carolina. After spending several days honing our skills at our favorite riding-some-sort-of-device-behind-the-boat activity, it’s time to leave our comfort zones and take a risk.

Not being a huge fan of water, “try something new” day for me means leaving my comfort zone behind my camera in the boat to “try something”! This year the rest of my family chose “wake surfing,” and I couldn’t pass up the challenge to try it myself. This fairly new sport involves pulling yourself up to a standing position on a very buoyant (and therefore wobbly) surfboard, letting go of the rope that connects you to the boat, and then freely “surfing” the boat’s wake.

Knowing that steps two and three would not be in my realm of possibility, I made it my goal to simply get to a standing position. Would it happen on the first try? Probably not, but I’d never find out if I didn’t try! So try I did. Once, twice, three times, four times. With each failure my chances of success were seeming less and less likely, but since the consequences of each failed attempt were low (perhaps some water up my nose and complaints from some children impatiently awaiting “their turn”) I was motivated to try and try again! 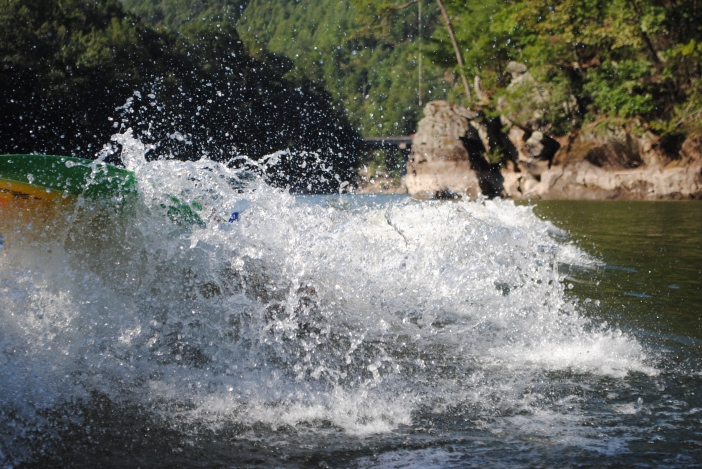 In his November 2016 TEDx talk, learning expert Eduardo Briceño spoke of the difference between the “learning zone” and the “performance zone”. In the “learning zone,” he said, we “do activities designed for improvement, concentrating on what we haven’t mastered yet, which means we have to expect to make mistakes, knowing that we will learn from them.”* According to Briceño, successful people spend the great majority of their time in the “learning zone” where there the pressure is low and they give themselves the freedom to fail. When we see the consequences of our failed attempts as minimal, we’re more likely to attempt a skill and therefore learn it!

As Christians we spend too much of our time in the “performance zone”. We look at a possible ministry task or even a simple step of obedience like prayer or sharing our faith with others and believe the results to be dependent on our performance. When I examine my own life, it’s easy to see that the majority of my stress comes down to taking myself too seriously – I fear that I am inadequate to do what God has placed in front of me and fear that my attempt, when it fails, will negatively impact God’s work in my own or another person’s life.

The apostle Paul, after rising by his own merit to Jewish religious prominence, had an encounter with the glory of Christ that caused him to see himself for who he really was – a fragile human sinner just like the rest of us. His life completely changed course and now, by the merit of Christ and his submission to the leadership of God’s Spirit, Paul again took a leadership role as he traveled to share the gospel and set up new churches in areas where they didn’t exist yet.

But after his credentials were questioned by a church he helped start in the city of Corinth, Paul felt compelled to write a letter defending himself and his ministry. In that time, it was common practice (as it is for us now) for travelling speakers or those seeking employment to verify their education and skill by carrying “letters of recommendation” from an authority figure.* But because he believed his only qualification to be from God Himself, Paul did not carry such letters.

In 2 Corinthians 3:4-6a, he wrote: “Such is the confidence that we have through Christ toward God. Not that we are sufficient in ourselves to claim anything as coming from us, but our sufficiency is from God, who has made us sufficient to be ministers of a new covenant, not of the letter but of the Spirit.” (2 Corinthians 3:4-6a) Paul knew that any visible or notable skills he had weren’t even worth mentioning because, even at the highest level, they would not have made him “sufficient”.

Because of his assurance that it was all about God’s glory and not about his or his ministry partners’, Paul says in verse 12: “we are very bold”. Before Christ, the Spirit of God was only “upon” a single person or group of people at a time, but now the power and work of this same Spirit was available to every believer, and “where the Spirit of the Lord is, there is freedom.” Paul could continue on in bold freedom because he knew his acts of ministry were not his performance, but God’s alone.

Like Paul, we also have the ability to walk in ‘bold freedom,’ but how often do we allow our fear of making mistakes to keep us from even trying? It’s so easy to look at the ways we lack (in comparison to others) and believe God could never perform through our inferior selves. But what if, instead of living in the pressure of the “performance zone”, we stayed in the “learning zone”? What if we looked at every ministry task or step of obedience as practice and gave ourselves the freedom to make mistakes? What if, “Entrusting ourselves to Mystery [the Spirit’s unseen work], we move forward fearlessly, knowing that the future of the planet probably does not depend on what we do next”?* 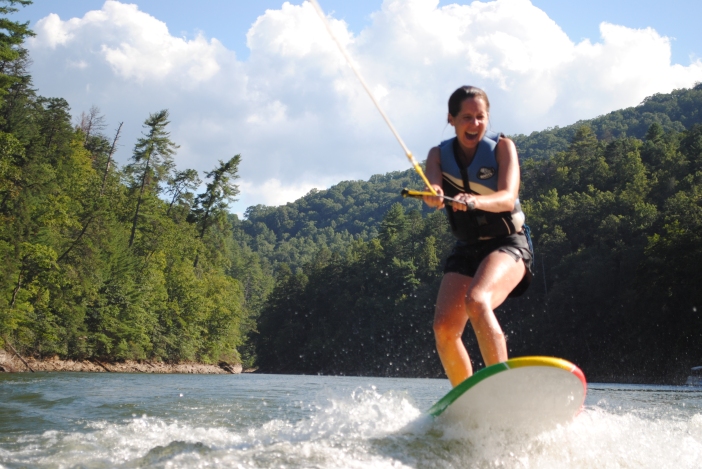 After several failed wake-surfing attempts that day this summer, I did finally get up on my feet! It didn’t last long as the board naturally ‘steers’ you toward the wake, and getting over that wave’s crest was a challenge my inferior balance wasn’t ready for. But at least I was up long enough for Tim to capture the evidence!

In verse 18, Paul encourages our practice even more with a reminder that, “we all, with unveiled face, beholding the glory of the Lord, are being transformed into the same image from one degree of glory to another.” Every “learning zone” step of obedience changes us. Though the weight of the results is not on us, we do benefit from the practice! We are in the process of being transformed to look more and more like Jesus.

So, what’s a ministry task or step of obedience you’ve been thinking of as a “performance” that you could start seeing as “practice”? Praying out loud? Studying the Bible? Offering to help a neighbor? Leading a small group or teaching in kids ministry? Joining the worship team? (Okay, that one might require some skill! 😉) I’ve opened up the “comments” section below and I’d love to hear from you!

For me, it’s talking to new people. Not only am I not “good” at making small talk, I often don’t know what to say and mistakes end up spilling out of my mouth. I also feel the performance-pressure that “talking to this person may somehow help them come to know Jesus!” But this fall, I’ve started looking at every conversation I have (big or small) as practice. I’ve started talking to cashiers, fellow parents, new youth group students, and random strangers without believing the chances of their salvation are on my shoulders. Yes, my face still turns red, I still say weird things, and I’m still not “good” at it, but I’m walking weightlessly in the bold freedom that “the future of the planet probably does not depend on what [I] do next”!

*”How to get better at the things you care about“, Eduardo Briceño, TEDx Manhattan Beach, November 2016
*https://www.biblegateway.com/resources/ivp-nt/Pauls-Letter-Recommendation
*“Ruthless Trust”, Brennan Manning, p. 141