Only this year I did skip the stuffing – or at least the stuffing balls my mom made. Which apparently contained bacon and were apparently amazing (according to the reviews around the table). But I passed them up. Because of onions.

Over the years of my life, my brain has taken in the taste, smell, and texture of these pungent vegetables, processed the emotion those senses triggered, and concluded that I do not value onions. Which means that when I see them in a dish that is offered (or even if I can’t see them 😉), I will turn up my nose and walk right past. Yes, even when there’s an opportunity for bacon. 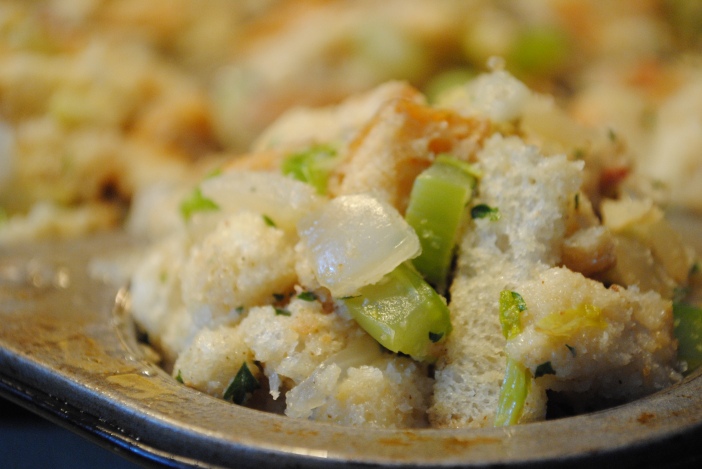 As humans we place value on things. Woven into human intelligence is the necessity of determining value because we cannot and should not value everything the same. Our brains take in information from our five senses – sight, smell, hearing, taste, and touch. We process that information and the emotion it triggers. That processing helps us determine what we prefer or don’t prefer and, over the long term, what we value. We then assign value by the action we take toward that thing.

Woven into every human-to-human interaction is the ability to assign value. When we are in the same space as another person, we automatically take in information from our senses – mostly what we see and hear (or possibly smell). We notice the external factors of a person’s appearance, race, economic status, family, and relationships. We observe their job or role, their talents, personality, intelligence, and maybe even what we’ve seen on their social media feed.

We process that information and the emotions it triggers, determining that person’s value according to us. We then assign value by the action we take toward that person. Whether we are conscious of it or not, in every interaction we have with another person, we are assigning value.

In Jesus’ day, much like our world today, the combined actions of multitudes of humans with multitudes of other humans led to the assigning of value to people. The circumstances, appearance, and visible actions of a person put them in a category. Based on that category, how they were to be treated was established.

In Jesus’ religion-based culture, value was determined by a person’s faith or connection with God. And the religious leaders of the time, specifically the Pharisees, emphasized human effort as the way to attain and sustain this connection. Their “rites were numerous, expensive, requiring much time, much property, and laborious. The Pharisees were rigid in requiring that all the people should pay the taxes, give of their property, comply with every part of the law with the utmost rigor.”* To them, this was the definition of “faith” and a person who would or could not comply, was devalued as unable to have “faith”.

The tension between these religious leaders and Jesus is noted repeatedly in Matthew’s gospel. As you read, it’s clear that Jesus intentionally interacted with people who could not or did not carry the Pharisees’ “load” (Matthew 23:4) because of their circumstances, appearance, or visible actions. In each case, He assigned value to these devalued people by making a big deal about their faith – or their potential to have faith.

It’s not surprising that Jesus’ first one-on-one interaction mentioned by Matthew (besides with John the Baptist and the disciples) is with a leper who, having been outcast from participation in faith activities because of his condition, showed evidence of true faith by saying “‘you can make me clean’” (8:2). This is followed by another one-on-one with a non-Jewish centurion, after whose confession of faith Jesus points out, “‘with no one in Israel have I found such faith’” (8:10). During an urgent trip to heal a synagogue leader’s daughter, Jesus stops to point out the faith of an “unclean,” outcast woman (9:22). Though many would have viewed people with disabilities as a nuisance or burden, Jesus welcomed them and called attention to their faith (9:29). He assigned faith-value to “tax collectors and sinners” (9:10) and children (19:14).

By seeking out, calling out, reaching out, and touching people who were not considered able to have “faith,” Jesus assigned value to them. He raised them up and raised their value, making them the example of true faith – which was not a heavy load, but a rest-filled trust in Jesus and His power as the Son of God. Their value was not determined by their external circumstances, but by their heart-and-mind connection to Him.

There’s one part of the Thanksgiving meal I certainly did not skip over this year:

I value pie. All the pies. Just knowing there was going to be pie for dessert resulted in action on my part: I purposely reduced the amount of dinner that I ate in order to save room for the largest socially-allowed amount of pie I could take. Yum!

We live in a society that values pie. We value our people. I value the people who, when I see or hear (or smell) them, they trigger all the positive emotions and therefore I gravitate toward them. I will easily give up other things and pass by other people in order to spend time with them. I assign value to them by making eye contact, smiling, giving them my attention, asking them questions, and being genuinely interested in their responses.

It’s great to have pie, but maybe saving so much room for pie makes me miss out on bacon. As a believer, I have the supernatural power of the Holy Spirit empowering me to see people – to not just take in what I see or hear from them, but to see the faith-value of every person I share space with. I have the ability to see every person as a highly valued intentional creation of God, made to know and be known by Him.

When I assign value to people I might have otherwise passed by, I have a chance to show them how valuable they are. I can’t heal people like Jesus did, but maybe by welcoming someone into my space and listening with my face, by learning their name and referring to them by it the next time I see them, by asking questions instead of talking about myself, and by embracing the awkwardness that always comes with valuing others, I can be part of a miracle.