Summertime = memory time = photo time! Two adventures in and my kids are already rolling their eyes at my attempts to get the ‘perfect’ shot 😉. Like God’s kingdom, our actual experience of a moment will always be better. How are you “seeing” the kingdom of God in action today?

The camera may be my favorite invention ever. Having the ability to capture what I see in front of me and share it with others is revolutionary. As a mom and adventure-junkie, my photos are my most treasured material possession! I never have to worry about forgetting those smiling faces, panoramic views, and milestone moments.

But no matter how good my high-tech DSLR or the latest-greatest smartphone cameras claim to be, the images always seem to fall short. Whether it’s inaccurate coloring, distorted faces, or warped perspectives, I’m always disappointed – because what my eyes saw was so much better! And even if it looks spectacular on my screen, it may look totally lame on yours 😕 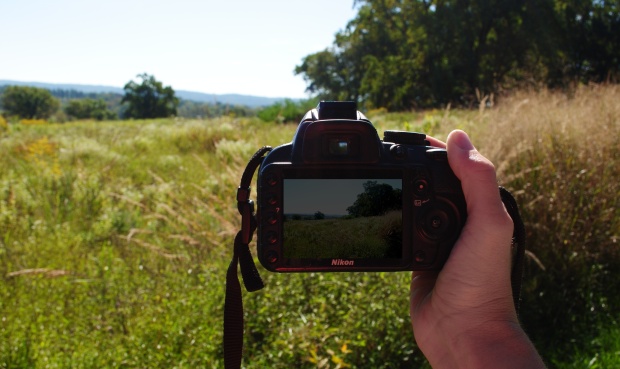 In John 3, a Pharisee named Nicodemus “came to Jesus at night and said, ‘Rabbi, we know that you are a teacher who has come from God. For no one could perform the signs you are doing if God were not with him.'” (v. 1-2) While most Pharisees would have publicly criticized Jesus during the day, Nicodemus’ curiosity led him to have a private discussion with Him at night. And he began the conversation by letting Jesus know what he had seen – signs and wonders that were out of this world.

But “Jesus replied, ‘Very truly I tell you, no one can see the kingdom of God unless they are born again.'” (v. 3)

To the Pharisees, the “kingdom of God” (His present, active influence and rule on this earth) was seen through physical eyes – it was measured in capture-able acts of outward obedience to laws and regulations. Jesus’ signs seemed (at least to Nicodemus) to be visible evidence of more of God’s work. But Jesus wanted him to know that what he saw with his physical eyes was nothing compared to what he would perceive if he looked through the eyes of belief. Though Nicodemus thought he was seeing God’s work, it turned out he was only viewing snapshots of it!

As physical humans living in a physical world, we put a lot of stake in the things we see, hear, taste, smell, and touch. If we experience something in one or more of these ways, it becomes real to us. When it comes to spiritual things, we long for those senses to be our evidence of God’s presence – if we can see, hear, taste, smell, or touch, then we can believe He’s real and really working!

But, as Jesus informed Nicodemus, the opposite is true – we don’t believe because we see, we see because we believe. Belief doesn’t happen as a result of evidence, the evidence is only visible as a result of the belief. Though we may see apparent glimpses of a spiritual world, the only way we can truly perceive God’s work is if we are “born of water and the Spirit” (v. 5). Your sin, in its self-interest and resulting shame, must be washed away so it no longer blurs your lens and distorts your view, and the Spirit of God Himself must then renew and regenerate you with His presence – giving you new eyes to truly see.

This summer our family had the incredible opportunity of viewing the solar eclipse from inside the path of totality. As we prepared for the event, I readied my cameras and studied up on how to best capture the moment – there were so many people who couldn’t be there and I wanted them to be able to experience it, too!

The moment was spectacular, but I’m sorry to report that I don’t have much to share. I tried using video to record the daytime becoming dark, but my camera automatically adjusted and added backlighting. I couldn’t seem to find the appropriate DSLR settings to represent how eerie the sun’s dimming light was. And I had no telephoto lens to capture the actual event of the moon blocking the sun – which means you’ll just have to experience the next one for yourself in April 2024! The Greek word for “see” in John 3:3 means much more than to view with the eyes, it means to “experience” or “to become a partaker of”.* Notice how Jesus first used “see” but then in verse 5 clarified by saying no one could “enter” the kingdom of God unless they were born again. The “snapshots” Nicodemus had seen could never depict the depth and dimension of the Holy Spirit’s uncapture-able (see v. 8) work – it could only be experienced in person!

If you’re reading this, I’m guessing you’ve been “born again” because you’ve received and believed the truth about Jesus – that He was God in human flesh, that He gave His life as a sacrifice, and that He rose again to rule His Kingdom in victory. Although many times we think of this “kingdom” merely as our eternal home in Heaven, the “kingdom of God” is something we are given the opportunity to perceive and partake in now.

As author Brennan Manning states, “A fleeting, incomplete glimpse of God’s back – the obscure yet real, penetrating, and transforming experience of His incomparable glory – awakens a dormant trust. Something is afoot in the universe; Someone filled with transcendent brightness, wisdom, ingenuity, and power and goodness is about. In the face of overwhelming evidence to the contrary, somewhere deep down a Voice whispers, ‘All is well, and all will be well.'” (“Ruthless Trust” p. 65)

My belief in Jesus determines not only my future in God’s eternal kingdom, but my experience of it today. The visible evidence may be lacking, but if I, in any given moment, acknowledge that He is good, that He is love, that He is present and working, and that He is over and above all things, then I will “see” His Kingdom. It’s not a magic formula, it’s the trust that opens my eyes. This kind of trust sees coincidences as divine appointments, watches and waits for hard hearts to become soft, and crops discouragement right out of the picture. “Jesus moments” are all around us if we have the eyes to see them!