I have to repost this one because we’ve been to both of these places so far this summer – Bass River State Forest Campground in New Jersey and the Okemo Mountain Road in Vermont!

I’ve also been thinking lots about this topic as we’ve been talking about confessing and throwing off sin with our middle and high school students on SERVE over the past couple of weeks. (More posts about that coming this fall!)

This summer, while driving up a winding mountain road in Vermont, I pulled over to snap a photo of the gorgeous Green Mountain view. This overlook was clearly a popular place to stop as there was plenty of space to park on one side of the road and a wooden fence on the other side, preventing people from wandering too far and tumbling down the steep slope below.

Or so I thought.

As I walked toward the sign and began to read it, I laughed out loud at my mistaken assumption: 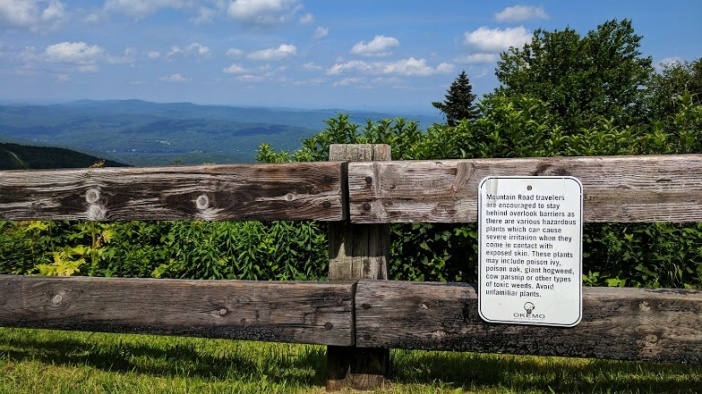 Though the risk of falling was a legitimate concern, there was a bigger deal at hand here. To those who thought they could “handle it” and get right up to the edge, this sign warned of a less-obvious risk. I’m guessing giant hogweed and cow parsnip (?!?) aren’t something anyone wants in their near future!

Sin is a big deal. The risks of crossing the boundaries God has set in place for our relationships with Him, others, and ourselves are real. The fences are there for a reason – it just may not be the reason we first assume.

In his letter to the church at Corinth, Paul addressed several “sin” issues the church was facing. Just as we do in our culture today, the believers struggled with whether or not certain acts should be labeled as “sin”. As the founder of this church, Paul’s words carried great weight and his wisdom was right on. In two very similar verses, Paul says:

Most of us, especially those who grew up under a “Because I said so…” parenting or church style, tend to think of sin only in terms of “getting caught” or in terms of the danger of the “obvious” consequences. But Paul challenges us to think differently – to look harder at the not-so-obvious consequences and then hold them up to the “life to the full” Jesus desires for His followers in John 10:10.

For example, the risks of gossip are obvious. My judgmental opinion about someone else could get back to them, hurting their feelings, and putting a rift in our relationship. But most of us – because we rarely “get caught” – continue on, not realizing that the brewing and sharing of these thoughts is a toxic weed that is slowly poisoning our souls.

In today’s world, where the boundaries have been blurred into an individually-defined “what’s sin for you might not be sin for me” pile of rubble, Paul’s principle for believers still rings true. The sacrifice of Christ means that the spiritual consequences of our sin (whether we called it sin or not) have been eliminated and we’ve been freed from living in a “getting caught” mentality.

However, that doesn’t mean we should throw caution to the wind and jump over the fence! The Spirit of God within us can help point to choices that will lead to “life to the full” in Jesus, but we also have been given brains to discern whether a choice is “beneficial” or “constructive,” so we will not end up “mastered” by anything.

In her book, “Why I Didn’t Rebel: A Twenty-Two-Year-Old Explains Why She Stayed on the Straight and Narrow – and How Your Kids Can Too,” author Rebecca Gregoire Lindenbach recalls being raised in a home where “reasons” were given priority over “rules”.* Instead of telling their children what to do, Lindenbach’s parents (age-appropriately) taught her and her sister how to make their own choices. “Something I consistently found across my interviews with kids who didn’t rebel was that none of us could really explain how we learned what was allowed. Rather, it was an ongoing conversation about right and wrong and about what was going on in that moment.” (p. 25)

After 20 years in youth ministry, I can tell you that, when raised in a “Because I said so!” environment, young people tend to evaluate their decisions based on two things: “Am I likely to get caught?” and “Are the others I see already engaging in this activity experiencing those ‘obvious’ consequences I’ve been warned about?” Since most of the time, the answer to those questions is “No,” the risk almost always seems worth taking.

But rather that telling our teens: “Sex is bad! You’ll end up with a disease or unplanned pregnancy,” we can have ongoing discussions about relational boundaries and the power of misplaced intimacy. Rather than getting on our “Don’t do drugs – they’ll fry your brain!” bullhorn, we need to help them find healthy, personality-appropriate ways to cope with stress and pain. And instead of harping on them about how “All that social media and Netflix-binging is rotting your brain,” we can provide them with opportunities to experience life outside their norm and to find a purpose outside of themselves.

One of Lindenbach’s case studies is a young woman named Alexis, whose parents expected her to make good choices and consistently told her she was smart enough to do so. “’My moral judgments grew so strong,’ Alexis explained, ‘that it was no longer about not disappointing my parents but about the impact that rebellious actions would have on me and on my future. I didn’t want rebellious acts to become habits that became who I was.’” She knew her parents expectations, but came to her own understanding that, “’to do well in school, go to university, stay away from drugs and sex – it’s clear how they benefited me.’” Teaching our children how to “construct” their lives on “beneficial” choices will prevent them from exposure to those toxic weeds better than any fear-based, flashy warning signs ever will.

On our way out of a New Jersey State Park campground this summer, we stopped to dispose of our trash. As I walked toward the dumpster, I saw this warning sign:

Hold on a second, I thought. Why are they making a big deal about this ONE thing when there are so many other risks at play here! Hello!? What about the bacteria, diseases, and sharp objects INSIDE the container?

If all our kids see are “Don’t stand on the dumpster, you might fall off!” signs, they’ll miss out on an awareness of the much greater consequences their choices might have on their heart, mind, and relationship with Jesus. And, as adults, when we focus on the “rules,” evaluating our decisions on the basis of whether or not we’ll be “caught” or weighing only the likeliness of the “obvious” consequences, we may end up wandering on paths of poisonous plants.

Our loving Father, who sees all and knows all, has good reasons for His commands. He’s given us His Spirit as a guide, but He’s also given us intelligent minds capable of seeking out, processing, and then building our lives on His reasons! 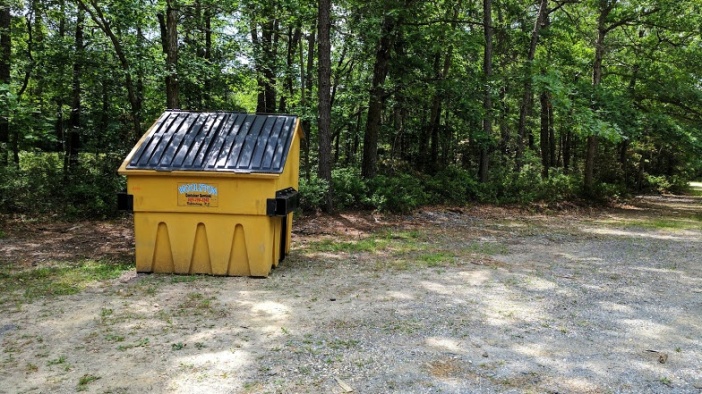 *“Why I Didn’t Rebel: A Twenty-Two-Year-Old Explains Why She Stayed On The Straight and Narrow and How Your Kids Can Too” by Rebecca Gregoire Lindenbach, 2017