Despite my irrational fear of planes crashing, I love to fly in them. I love the anticipation of arriving at the airport, the feeling of hundreds-of-tons lifting like magic off the ground, and the temporary sense of bonding I feel with people who are all going to the same place as me 😊.

Every time I set my backpack on the conveyor belt, I’m sure that it’s going to get pulled off for something. As a mom of three, my backpack just collects stuff. And in the last-minute-packing rush, dumping everything out to check for any TSA problem items isn’t at the forefront of my mind… until my bag disappears through the curtain into the luggage scanner.

Both Tim and I have had bags pulled off and hand searched, revealing giant pairs of scissors and pocket knives that we had no idea were in there 🤦. The funny part is that it’s always been on the flight home, which makes us a little concerned about the “security” of the Philadelphia Airport!

Before the first act of disobedience, all humankind knew was complete known-ness with God. Adam and Eve had nothing to hide and, had they heard them, the words of Hebrews 4:13 would not have induced even an ounce of anxiety:

Nothing in all creation is hidden from God’s sight. Everything is uncovered and laid bare before the eyes of him to whom we must give account.

“Of course!” they would have said. The fact that they were unable to hide anything from their Creator was no big deal because they didn’t have anything to hide. They knew of no potential hazards to their relationship with Him and there were no surprises in their bags!

But in our post-fall world, hearing that “everything is uncovered and laid bare” before God can prompt panic. We’re packed with a mix of sin we are fully aware of, sin we are semi-conscious (but also potentially in denial) of, and sin we haven’t yet been humbled enough to see (but we know may exist). Fearing the humiliation and loss that might come with everything being uncovered, we zip up our bags and hope maybe He won’t notice us.

If we had forgotten the name of our God
or spread out our hands to a foreign god,
would not God have discovered it,
since he knows the secrets of the heart?

Our hearts may be packed with secrets, but the Spirit of God is packed in there, too. There’s no thing that can be “hidden” from His awareness, so even if we have “spread out our hands to a foreign god” in ignorance, He knows because He was right there when it happened. 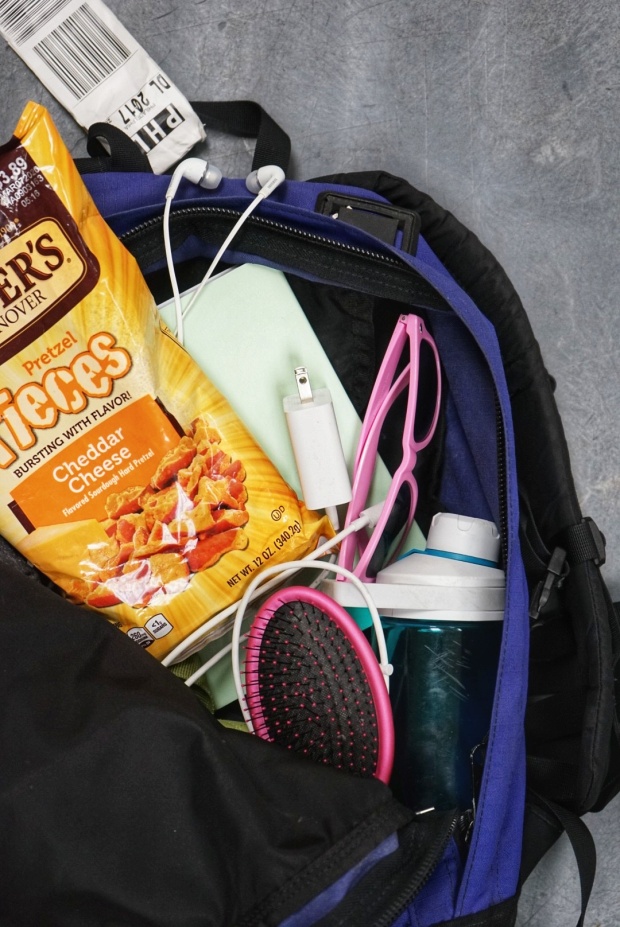 On our trip to Colorado last year, we took on a whole new endeavor: getting our entire family through airport security. We were as prepared as we could have been (minus the “water baby” doll I had to frantically squeeze the life out of over a trash can 😜). Regardless, my bag was so chock full of stuff, I felt like I should have just handed it to an agent and said, “You might as well search this, I’m sure there’s something in there!”

I didn’t, but of course my bag did get pulled off and a thorough search involving multiple agents and special testing tapes revealed our snacks to be the culprit! Yes, my bag of “Snyder’s Cheddar Cheese Pretzel Pieces” had traces of a substance used in bomb making on it. I mean, the amount of cheese in these could surely cause some *explosive* activity for some people, but who knew the Target cashier’s hand lotion could make such a scene?

As strange as a voluntary bag search sounds, a voluntary “heart search” is always in order. As theologian A.W. Tozer taught, God is “never surprised, never amazed. He never wonders about anything nor (except when drawing men out for their own good) does He seek information or ask questions.”* God doesn’t have to search our hearts, but He is very willing to perform a scan for our “own good”. Especially if we ask!

Most of us know, like Adam and Eve probably did, that the “fig leaves” they used to cover themselves were not an effective way to “hide” from God. We know He knows it all, so when we’re hiding it’s not really that we’re trying to keep something from Him, but more that we’re trying to keep it from ourselves. Admitting there’s something in there means facing it, which makes us want to grab our stuff and exit the terminal immediately!

But what if? “Traces” of glycerin may not seem like a big deal, but what if there’s healing in my relationships that I don’t even know needs to happen? What if the particular weakness or temptation in me is something that, when shared, could help another believer who is struggling? What if it could lead someone to Jesus?

What if you handed your heart to God today and asked for a full search?

*A.W. Tozer, “The Knowledge of the Holy”